In 2019, Hotel The Craftsmen opened its doors in the Canal District of Amsterdam. This historical monument offers 14 rooms, each portraying a unique Dutch historical craft. But long before the opening of the hotel, the stately building on the Singel already had a rich history. 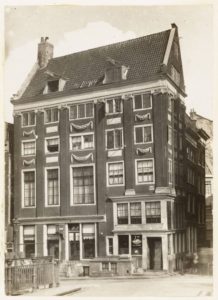 In 1651, Nicolaes Swaen bought the two houses on the Singel and gave them its original name, De Swaen (The Swan). Nicolaes was a grocer and herbalist from Rotterdam and was married to Elisabeth de Reus, the daughter of Rotterdam’s mayor and administrator of the Dutch East India Company, Johan De Reus. Johan De Reus’ father was his predecessor in Rotterdam, hence they hailed from great stock. 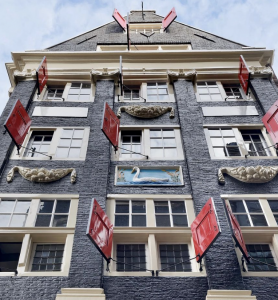 The surname of the building’s first owner Nicolaes Swaen is portrayed on a plaque on the facade of the building, illustrating a white swan. This plaque had a practical purpose as back in the days, houses did not indicate house numbers but were boasting distinct adornments for orientation purposes. This house was most likely known as ‘the house with the swan’ or simply ‘the swan’.

Roelof Swaen, employed by the Admiralty of Amsterdam and Lieutenant under The Netherland’s most famous Admiral ever, Michiel de Ruyter, inherited the building. Roelof was Captain of the Noord Holland ship and took part in the battle of Beachy Head in 1690.

Upon his return, Roelof was appointed Captain of ‘De Vrede’ (the Peace). It was with this ship that he met his demise. He perished in a storm on February 2nd 1697 near Sant Antonio, a Spanish town on the island of Ibiza. Some of the crew survived, but Roelof was unfortunate. 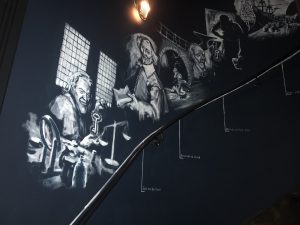 Anna Swaen-van Sijdenburg inherits the building after Roelof Swaen’s tragic death. In 1698 she marries a wealthy widower, merchant and appraiser of precious metals Andrias Gallus Grill. He was the son of a surgeon and was born in Zaandam, just North of Amsterdam. His first wife was his cousin Catharina Grill, whose name he adds to his own. This was often done for business purposes. The double name of his second wife Anna indicates that she might have been a widow herself.

After the death of Anthony Grill, a descendant of Anna and Andrias, the building was passed onto Christiaan Hulst in 1734 to pay off a debt. Together with his brother, he runs a company in coals and a forge where anchors were produced. 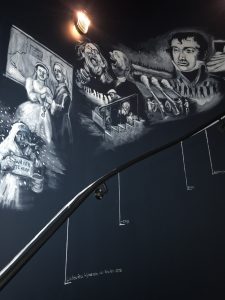 When the owner Christiaan Hulst died, the building was gifted to Ludewina Wijnanda van Keulen. It was passed on through her mother, who was related to Christiaan. Ludewina hailed from a cartographer family. One of her forefathers, Johannes van Keulen, was running a successful business printing naval charts and sea maps. His son took over the business, and in return, passed it on to his son and so forth. Among others, the Dutch East India Company would get their maps here.

After Ludewina died in 1808, the property was sold in 1811. Very little information is available on any owners after, as there are no deeds to be found anymore. 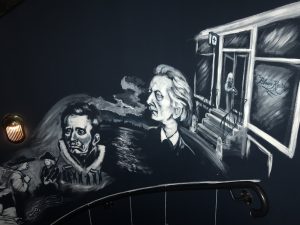 From 1853 onwards, Singel 83 was the address of Pension Het Blauwe Kruis, a hostel for Catholics who renounced alcohol. This is the first documented use of the building as a place to spend the night. Next door, on number 85, is a carry and dispatch service.

In the early 20th Century, the building served a rather odd, dual purpose. Number 83 was still a hostel and coffee house for those who abstained from alcohol, while next door, on number 85, was a liquor store.

In 1940, when troops invaded the Netherlands, the building on Singel 83 was passed onto Gerrit Jan Brouwer, a carpenter who had come from the island of Texel to help renovate Hotel Schiller on Rembrandt Square. Miss Rebel, the owner of the hostel and coffee house for abstainers, thought he was the ideal candidate to take over. It was called the “Blue Cross”, the name indicating that no alcohol was allowed to be consumed on the premises. 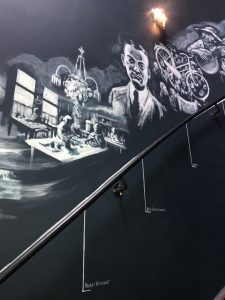 The building’s name then changed to Hotel Brouwer, an attractive option for tourists with a limited budget, visiting Amsterdam for a short stay. The hotel was even mentioned in Arthur Frommer’s book from 1957 ‘Europe on 5 dollars a day’. Travellers could leave their business cards, notes and personal messages that the owner would pin onto the giant chandelier in the main room, which is today’s breakfast room.

From 1983 to 2019, Wim Brouwer was the owner of the hotel. He used to be business partner with both his mother and uncle, but when Gerrit Jan Brouwer dies, Win Brouwer was gifted the hotel as an heir.

In 2018, after 100 years in the caring hands of the Brouwer family, a new family is joining the history and future of the stately monumental building in Amsterdam under the name: Hotel The Craftsmen. 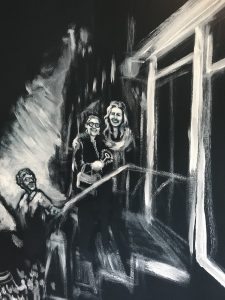 The entire history of the monumental building has been portrayed on a painting across the hotel’s staircase. Come and have a look to discover the unique history of the building behind Hotel The Craftsmen.